Some cuttings to be filed, under …

Most wars can be identified by their own slang, and Afghanistan was no exception. As British combat operations come to an end, BBC defence correspondent Jonathan Beale and Thomas Martienssen pull together a short lexicon of words and abbreviations used during the conflict.
ALLY Term for a battlefield fashionista – desirables include having a beard, using a different rifle, carrying vast amounts of ammunition, being dusty and having obscene amounts of tattoos and hair. Special forces are automatically Ally.
• BADMIN Used to describe a soldier with poor organisational skills or inability to look after their kit properly.
• CRAP-HAT A unit judged as inferior. For the Parachute Regiment, that includes every other unit and regiment.
• CROW New soldier recently out of training. Hardly a term of endearment.
• GANNERS Royal Navy and Marine reference to Afghanistan..
• GUCCI A reference to a desired piece of kit, as in: “That sleeping bag is a Gucci piece of kit.”
• IED Improvised explosive device, otherwise known as roadside bomb. Similarly VBIED – vehicle-borne improvised explosive device and DBIED – donkey-borne improvised explosive device.
• JINGLYTRUCK Reference to brightly coloured Afghan trucks – often decorated with chains and bells.
• LASH VEGAS W hat was the British HQ at Lashkar Gah. More luxuries than most FOBs (forward operating bases).
• TERRY As in Terry Taliban. Common reference to the enemy. The American expression is T-Man.
• UGLY An Apache gunship helicopter – an obvious reference to its menacing appearance.

FILOFACTS ON HOUSE & HOME: GLUE
The Shed had a cabinet maker in recently, took the opportunity to talk about glues which will do a bit of filling and got a recommendation for stuff which is sold as cascamite, resinite, resintite or polymite.
see the Filofacts pages of this blog: link to follow

A-Z OF EVERYTHING: DRUGS
Telegraph columnist Andrew M Brown is an expert on the history of drug-taking and made the following observation in his column in Teleg 9.11.14 …
Saffron is being cultivated in Essex again, but will anyone ever bring back opium to East Anglia? According to Virginia Berridge, in Opium and the People, the white opium poppy was indigenous in the Fen ditches in parts of Cambridgeshire and Norfolk. Poppy-head tea was a common domestic remedy. Then in the 18th and early 19th centuries various enterprising farmers experimented with commercial cultivation, to rival the imported product.
It is not always understood how widespread opium use was in Victorian times, across all sections of society. Consumption was high in the Fens because opium was a treatment for ague, the malarial disease that affected farm workers in marshy areas. It is amazing now to read accounts of the experiments with opium cultivation. They calmly discuss the practicality issues – “marauding hares”, or the cost of child labour (threepence a day for a boy of eight). But no one seemed to think that the opium itself was anything to worry about. The drug’s use was just part of life.

A-Z OF EVERYTHING: PASTA SAUCE
The Shed would like to try the pasta sauce invented by Tim Hauser, founder of Manhattan Transfer and recently deceased. His obituaries revealed he had spent the last five years trying to bottle the real thing he discovered when the band toured Italy. He died after raising a crowd-fund to market it but there doesn’t seem to be any distribution fixed yet. Keep an eye on the Hauser I Made Sauce story.

PIN-UPS
See link below to glorious photo of Sophia Loren and Jayne Mansfield, 57 years ago, which has done the rounds again recently, on the back of an interview with Loren in which she remembered Mansfield hijacking her Hollywood launch party …
She came right for my table. She knew everyone was watching. She sat down. And now, she was barely… Listen. Look at the picture. Where are my eyes? I’m staring at her nipples because I am afraid they are about to come onto my plate. In my face you can see the fear. I’m so frightened that everything in her dress is going to blow—BOOM!—and spill all over the table.

picture to go in here, with thanks to the Popwatch site for passing it on and respects to the UPI photographer who got it in the first place … 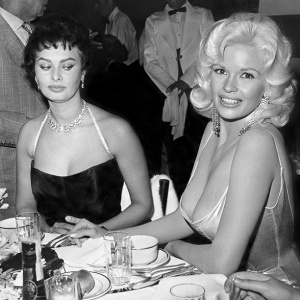 Comment welcome, if you can - site still unfinished. Cancel reply